Alice Cooper Vol. 1: Welcome to My Nightmare by Joe Harris 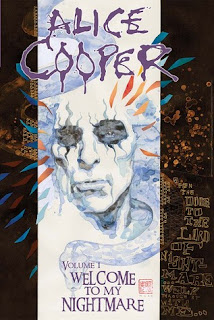 by Joe Harris
My rating: 3 of 5 stars


This is strange, odd, bizarre and all those things you'd probably expect a comic book starring Alice Cooper to be. It was a fun read though not serious by any means. Here, Alice is a paranormal being back to his own domain as the Lord of Nightmares and the book covers two story arcs. The longest one has him up against Clan Black who want to oust him from his role. The second one has Alice fighting against his own nightmare and is my favourite of the two. This is pure fun, a bit campy, the art is ok, and I'd recommend it especially to die-hard Alice Cooper fans (which I'm not) as they'll appreciate it for what it is the most. However, after reading the whole book, it was overshadowed by the inclusion of the entirely kitschy Marvel Premiere Issue #50 which features Cooper's comic book debut as a mental patient!