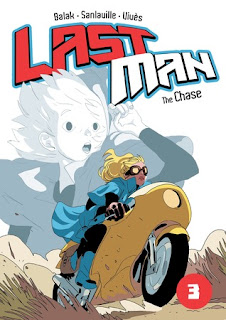 by Bastien Vivès; illus. by Michaël Sanlaville & Balak
My rating: 5 of 5 stars

The men are gone and Marianne takes off with Adrian across the Rift which is hidden in a heavy fog. On the other side, they arrive in Nillpolis, a place that reminds me of the Mad Max world, where the search (or "chase" of the title) goes on both for the missing Richard and from the nefarious authorities of this cruel barbarian land. This is a fast-paced volume that is entirely action-packed as they meet adversity every step of the way. Many new characters are introduced, but this seems to be an episodic adventure along the way so these characters may not return. There is an awesome battle scene at a trial as the lawyers physically fight each other! One of them looks just like Steven Tyler from Aerosmith, except about 8ft tall! This volume though brings the series to a more mature level than the previous two as both rape and prostitution are themes as well as strong language usage including the f-word. So don't be fooled by the cute cover illustration. I'm really enjoying this French manga-style series and look forward to book 4.