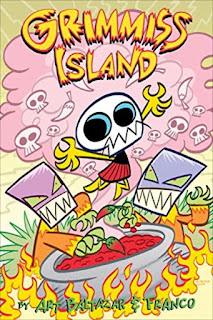 by Franco & Art Baltazar
My rating: 3 of 5 stars

I love Baltazar and Franco's art and as always this was a feast for the eyes. I have a special thing for skulls so found Grimmiss and the whole theme here to be spectacularly drawn. I just loved the Pajamazons too! However, I didn't find it that funny. It was annoying that Grimmiss spoke only in Spanish (and briefly French) with no subtitles so I never knew what the heck he was saying. It wasn't important as others suggested what he might have said, but he would have been a better character had he had gag lines and important things to say. Really fantastic art but I'd hoped for a better and funnier story.