Child Soldier: When Boys and Girls Are Used in War by Michel Chikwanine & Jessica Dee Humphreys 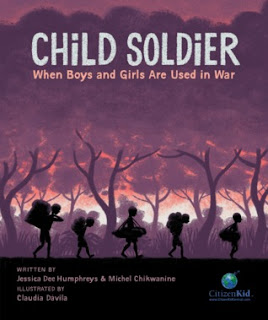 Child Soldier: When Boys and Girls Are Used in War

The author's memoir of his early life in Congo and the time he was kidnapped by rebels to be trained as a child soldier. He speaks of the harsh realities of his young life, his escape, his stolen childhood that cannot ever be returned even after he's back home, and his eventual immigration to Canada. An honest, eye-opening book for today's Western children to see what life is like for so many children in this world. Michel was five when he was taken as a soldier and while this book doesn't hide any realities it does keep information appropriate for younger readers. Sharon McKay's "War Brothers: The Graphic Novel" set in Uganda is a much more brutally raw story for older readers and the better of the two, imo. However, "Child Soldier" is certainly a touching and inspiring story to start with on the subject.