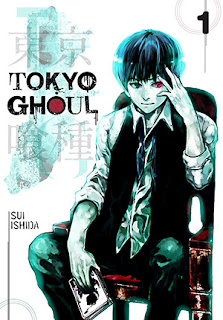 Tokyo Ghoul, Volume 1 by Sui Ishida
My rating: 5 of 5 stars

Oh man! An amazing start to a series. This paranormal/horror manga features human-eating ghouls! The main character, a college student, gets infected by an organ transplant and becomes the first human/ghoul half-breed. He's taking on the special qualities of the female ghoul whose kidney he received. Ghouls are normal occurrences in this society and thought of as ravenous monsters and Ken Kaneki refuses to give in to the hunger and eat. The other ghouls don't like him either because of the general human opinion of their kind. But Kaneki's hunger will eventually drive him crazy and this volume takes him up to that point, where a friendly ghoul, kind of a housemaster for the local population talks reason to him. We meet a handful of characters and get to know them enough to form opinions. I love them and can't wait to learn everyone's back stories! I've got future volumes on pre-order already! For a horror story with college-age characters though the book isn't overly violent or mature, in the least. The T+ rating is overly generous at this point; some volumes of Bleach are more violent.