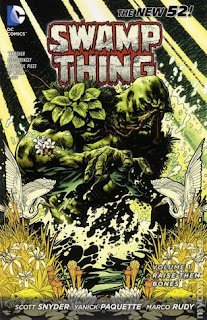 This is the very first time I've ever read Swamp Thing; I know his basic story though from somewhere (perhaps there was a cartoon in the old days?) Anyway, really glad Scott Snyder was at the reigns as he's one of the best writers and did a good job with a very strange and yet typical story of someone (well two someones) being called to be the saviour of a kingdom. Here we have The Green vs The Rot which I found similar to the good vs evil in King's Stand and thus the Biblical good/evil. This is a set-up story re-imagining Dr. Holland's story of how he became The Swamp Thing and both his and the current plot's background story. Although Superman shows up on the first pages looking for Holland there is no tie-in with the rest of the DC world. I could get into this; it's pretty dark and violent and very different from everything else I've read in The New 52 to date.