The Last Man 2: The Royal Cup by Bastien Vivès 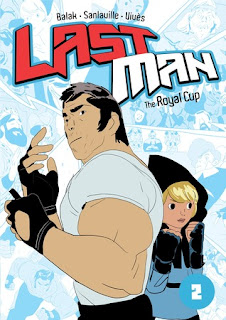 The Royal Cup by Bastien Vivès
My rating: 5 of 5 stars

Loving this series! A French author writing a quasi-manga series. It has all the action and plot of a shounen manga but much more character depth and that certain "quelque chose" I love about French comics. This volume brings us to the battle competition and its completion. Intrigue abounds though, especially with the identity of our mystery man. We are given a few hints, though nothing to hang our hat on and by the end of the book we find a cliffhanger ending that shows another character he either knows about or may be from the same origins. I adore these characters and can't wait for the next volume. Kudos to First Second for picking up this popular French comic and bringing it to us in English!