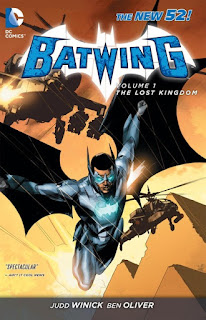 Batwing is another BatFamily member I'm unfamiliar with, having only met him in passing through the, I think, "Death of a Family" arc. Apparently, Batwing is a relatively new character being invented just prior to the New 52 reboot. I found the character intriguing. While this volume's plot is only mediocre: lots of warlords and guerrilla warfare without any 'real' supervillains I did like the look back at a special African superhero team who is now being targeted for death by the mysterious masked Massacre. This is a violent book, lots of severed limbs and heads, but it is realistic and shows the nature of the warlords. A quick read for me, not terribly exciting but , as I said, very intriguing; the end has Batwing headed towards Gotham City with a couple of familiar Batfamily members awaiting his arrival. I'll certainly read the next volume to see where this character and plot go.