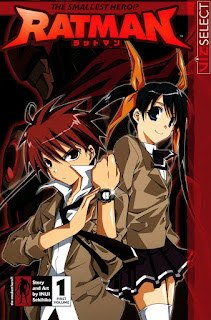 Ratman Volume 1 by Sekihiko Inui
My rating: 3 of 5 stars

A superhero story! Plenty of humour in this world that comes across as a pastiche of the American superhero. It's a corporate world protected by corporate-owned superheroes and 15yo Shuto wants to be a hero more than anything else. Only problem is he's short, not even 5 ft tall, and shrimpy. It took me about half the book to get into as I couldn't get comfortable with who the intended audience was supposed to be: it was funny and even cute at points feeling like a kid's book but in no certain terms was it as the language was highly mature teenager-speak and while there is no sex, it is sexualized and up-skirt shots are common. At the half-way point, the plot actually set in and kind of grabbed me. I don't like the main character at this point, but the minions (called Jacky) are awesome). There is a theme running behind the scenes attempting to ask the question "just what is a hero really" which I hope becomes a bigger part of the plot. Will certainly move on to volume two hoping for more development. 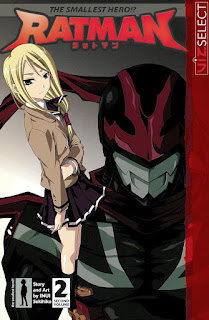 Ratman, Volume 2 by Sekihiko Inui
My rating: 4 of 5 stars

This volume is pure action with Ratman getting involved in everything whether he's been sent out on a villain's mission or he takes on a hero's mission of his own volition. Lots of fun! I found it a speedy read. And I love the minions called Jacky!!I did find Ratman's ideological speeches rather annoying as if violins would start playing at any time, and more suited to an elementary situation, not this one with its frequent use of mature language. I'll probably read on at some point but just not now.