96: Nura: Rise of the Yokai Clan, V19 by Hiroshi Shiibashi 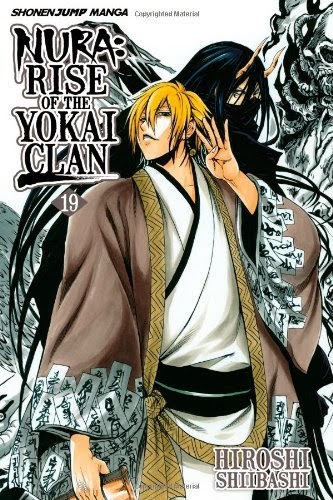 "Rihan and Kurotabo join forces in decadent Edo Period Japan, forming an otherworldly bond in order to vanquish their enemy. Little do they know that the Hundred Stories clan and its leader—the dreadful, dismembered Sanmoto—are far from defeated! Back in the present, a yokai named Kudan is spreading rumors that Rikuo is bent on world destruction and must be stopped by any means…"

Not quite as exciting as the last several books as too much is going at once and I felt somewhat lost or perhaps confused is a better word.  Starting off with a huge battle against an horrendous foe we are still back in Rihan's Edo past and thus the story of the battle of the war between the two clans has now been told.  After all the adrenaline from the last volumes it feels weird to go back to school with the human side of Rikuo and a long absent classmate, the scared Kana, makes her appearance once again.  Here in the human world is where the current members of the Hundred Stories clan converge to finally take down the clan of Hundred Demons.  They have a plan to put in action, a game to tease out the third heir to play, one he cannot refuse to play and humans and yokai are at battle with each other again, but the ultimate foe has been named as Rikuo Nura.  This is the beginning of a new storyarc and the synopses of the next volume sounds very exciting.  So another good volume, just a tad too much happening, too fast, to fully appreciate.
Labels: 2014 4* manga paranormal shounen viz media