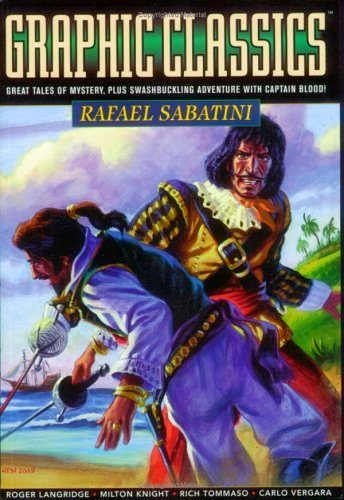 • The Dream
A tale of love, murder and hypnotism, as illustrated by Rich Tommaso

• The Risen Dead
A walking corpse and an abused woman's revenge,
adapted by Antonella Caputo and Jackie Smith

• The Plague of Ghosts
A petty criminal turns ghost-hunter, illustrated by Gerry Alanguilan

• The Spiritualist
Is it spiritualism, or charlatanism? Illustrated by Roger Langridge

• The Fool's Love Story
A jester's unrequitted love, presented by Milton Knight,
and starring his characters Hugo and Trish!

I had never heard of Sabatini before I started reading this series and noted his name on the list of titles.  Since then I've read one story in another collection in this series but do not think I've come across him anywhere before.  Since I didn't know the author I started by reading the brief bio always included at the end of these books.  That he was most well-known for his sea-faring, buccaneering stories interested me as did that he was a writer of the 20s and 30s, as I like literature from that time period.  This was a very entertaining book for me and a great introduction to a new-to-me author.  I now realise that I've seen the old Erroll Flynn type movie remakes of his novels but the first story here, an adaptation of the swashbuckler Captain Blood was my least favourite.  What follows is then a varied collection of short stories which would be classified as of the macabre, ghost stories, mysteries, perhaps horror.  I enjoyed all of them and now would most certainly read any shorts I came across by this somewhat elusive author.  There is also included a short graphic biography of Sabatini's life as well, which I enjoyed.  Another book in this series did that also and I was impressed when it was done then.  This graphic-bio. introduction to the author would make a great regular feature for the author-themed titles in this series.  The art is of the usual quality that one expects from the earlier books in this series.  Black and white with varying degrees of styles that all appealed to me in one way or another.  A fine book in the collection and a great way to sample a new author.
Labels: 2006 4* anthology classics eureka productions graphic novel short stories