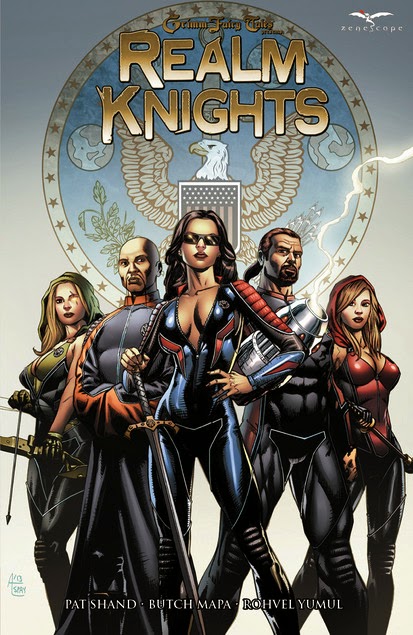 "Sela. Robyn Hood. Red Riding Hood. Captain Hook. Neptune, God of the Sea. Van Helsing. On their own, they are some of the most powerful beings in the Grimm Universe... but together, they are the Realm Knights! Brought together to stop an ancient evil from regaining his all-powerful weapons, can these conflicted warriors work out their own issues in time to save the world?"

I really enjoyed this.  It collects together a bunch of the Grimm Universe characters and makes a special ops team out of them (mostly against there will) to fight off Cronus who is trying to reunite the Titans and take back control of the world.  Fun mixture of Greek mythology and the Grimm Universe.  Only problem is that this book falls into a continuity that has already started somewhere that is not made clear to the reader where they should start.  There are lots of asterisks referring one to either published trade collections or single comic issues.  The only character I had previously met before in my Grimm reading was Robyn Hood; I'm sure knowing some of the others would have raised my enjoyment level considerably.  The 2-volume "Unleashed" series is referred to in the asterisks and, as far as I can tell, should at least be the books to read before this one.  I found the art a little underwhelming than what I'm used to with anything I read from Zenescope; this is the first time I've come across Mapa on artwork and the gorgeousness from the regular stable of artists is just not there.  This is an interesting team-up though, I especially liked Van Helsing (she is awesome) and I'd read more.
Labels: 2014 3* fantasy. zenescope graphic novel