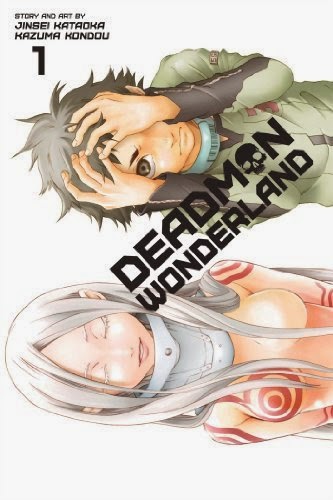 "Framed for the brutal murders of his classmates by the mysterious Red Man, middle-school student Ganta Igarashii finds himself sentenced to death in the bizarre and fatal theme park/prison known as “Deadman Wonderland.” The inmates of this insane penitentiary fight for survival every day to provide entertainment for the masses. Ganta is determined to survive Deadman Wonderland and clear his name, but the price may be his soul…"

Off to a fantastic start. This is creepy, unsettling, horrific Japanese dystopia at its finest.  Add in a paranormal element and everything you could want is here.  Deadman Wonderland is a most unique world; an amusement park built on top of a privatized prison, the park is run by the inmates and the death row inmates are especially heinously controlled and  made to participate is events (games) which result in life or death.  A little like "Hunger Games" only more violent.  While futuristic and dystopian the story easily crosses over into horror.  Numerous cast members are introduced in this first volume but the focus is on the main two characters, Ganta wrongfully imprisoned on death row for a massacre he did not commit and Shiro, a strange girl with white hair who befriends him.  Awesome new series!  I love this kind of stuff!
Labels: 2014 5* dystopia horror manga science fiction shounen viz media