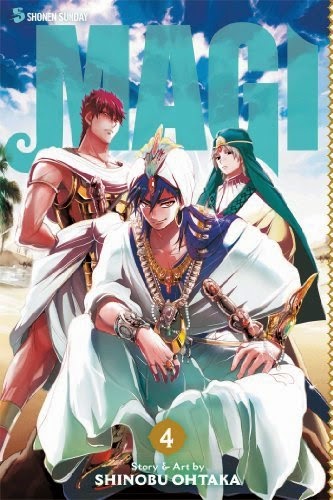 "After many adventures, Aladdin and Morgiana finally reach the great city of Balbadd, only to find it seething with corruption and dissent. There, Aladdin reunites with his friend Alibaba hoping to once again capture a dungeon together. However, Aladdin finds that Alibaba has changed and has become the leader of a band of outlaws..."

I continue to enjoy this series immensely.  It has everything I love: magic, battles, paranormal, developed characters and a strong storyline.  Morgiana is probably the focus of this volume, though Aladdin is a close second. Captured by slave traders once again Mor. puts her new found talents as a Fanaris warrior to use and we have some great strong female warrior action as she saves not only herself but many others, eventually meeting up with Aladdin once more.  They set off on the journey to Balbadd together, Mor so she can take the ship back to her homeland and Aladdin so he can find his long separated friend Alibabba.  What greets them in Balbadd is a town under siege and terror of a horde of thieves who rob from the rich and give to the poor.  But they meet the King and he is a nice guy so they agree to help him out with the thief problem.  Old friends reunite under difficult circumstances and introduced is a new familiar character from the annals of "The Arabian Nights".  A great ending to the book in the way of:  "now let me tell you a story ...."
Labels: 2014 5* fantasy manga shounen T viz media YA