127. Tales From the Farm by Jeff Lemire 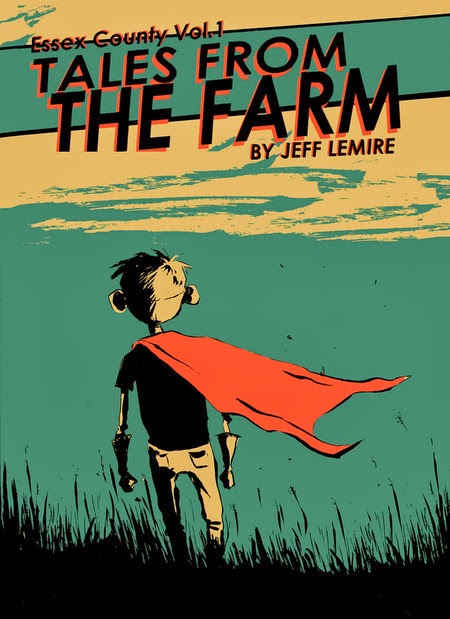 " The tale of Lester, an orphaned 10-year-old who goes to live on his Uncle's farm. Their relationship grows increasingly strained and Lester befriends the town's gas station owner, and damaged former hockey star Jimmy Lebeuf. The two escape into a private fantasy world of super-heroes, alien invaders and good old-fashioned pond Hockey. Tales from the Farm is the first volume in a trilogy of graphic novels set in a fictionalized version of Lemire's hometown of Essex County, Ontario."

Divided into the four seasons, this tells a simple story of the first year of a ten year-old boy's life living with his bachelor Uncle Ken in rural Ontario after his mum dies of cancer.  I wasn't too impressed with the first "chapter" but by the second had become engrossed in the simple, yet taught and tragic story.  Life is often a melancholy affair with a series of events that may bring a slight spark to the daily hum-drum and that love is present but not always shown with feeling but rather with actions, these are themes.  Because the main character is ten, the book may be mistaken for a children's book, but it is not.  As I've said it is a melancholy subject, rather dark with only a spark of brightness.  It also contains heavy language. I liked the story and I liked the characters.  The drawing of Jimmy reminded me very much of the huge farmer in "Lost Dogs" and it is with him whom my emotions most lay.  I'm not quite sure I understood the meaning of his departure? at the end though.  Was that play or real?  Hmmm
Labels: 2007 4* canadian author graphic novel realistic fiction sports superheroes top shelf