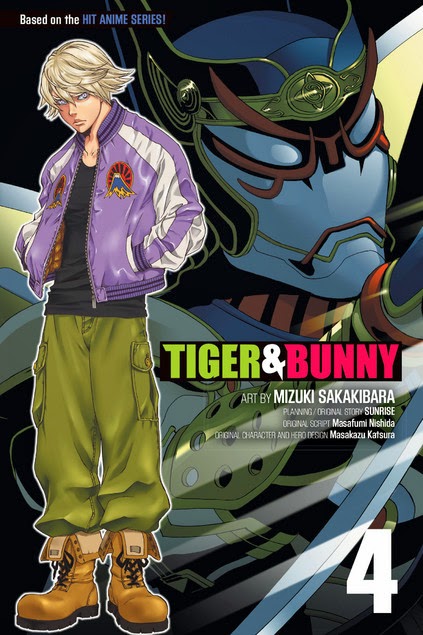 "The heroes face down the deranged NEXT killer Lunatic. Lunatic’s vigilantism has the city on edge, and the heroes find themselves having to convince everyone that NEXT are working for the good of Stern Bild City. Lunatic is in the wrong, but there is much more to the madman than anyone knows…"

A good issue that takes up the plot of the strange hero introduced and at the end of the last issue and we meet the entirely creepy NEXT "Lunatic" who is a vigilante type, working solo to rid the world of convicted criminals and if they aren't actually guilty ... oh well!  The Heroes on Hero TV must find this guy, get him out of action and restore the Heroes' reputation with the people back to them as they haven't been having much luck lately.  The hero to make an appearance and get his focus this time is the Origami Cyclone, a nice guy who is similar to Bunny in looks, a bit smaller, more rugged, appears to be younger, but one brief mention seems to say he is older, however around the same age.  Origami doesn't feel like hero material as he thinks his power is lame and not a front-line player who could ever make a difference.  With the help of T&B they put him to work and he works as a team using his power of impersonation is a crucial part of bringing in criminals while at the same time the Lunatic is trying to take him down.  Good Stuff!!  Japanese superheroes are a totally different breed than US ones, that's for sure! LOL
Labels: 2014 4* manga shounen superheroes T viz media YA