275. A Distant Soil: The Gathering by Colleen Doran. 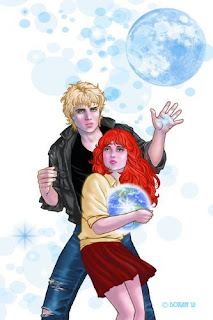 "The first new edition of the A Distant Soil series since 1987: 240-pages of story and art completely restored and remastered with new cover art and all new interior design. A teen brother and sister, Jason and Liana, are confined to a mental hospital where they are the subject of secret government experiments. They escape their prison only to be pursued by supernatural forces, strange alien people, and creatures with unique powers. Separated and kidnapped by two different factions of warring worlds, they learn they are the children of a race of powerful and ageless psychic beings. The brother and sister are then used by both factions of these alien forces to unknowingly battle against one another. Combining the sci-fi space opera of Star Wars, the grand romance of Twilight, and the visual opulence of Final Fantasy, the A Distant Soil saga finds Liana forced to ascend to the throne of the alien world. Her unique power makes her a living weapon of mass destruction, the first line of defense for the corrupt alien government."

Received a review copy from the publisher through Netgalley.

This is a restored and remastered definitive edition of this classic graphic novel.  Self-published in 1987 and re-issued by Image Comics in 1997; this new edition even has a digitized font made up from Duran's hand lettering in the original editions.  This is my first time reading the book so I'm unable to compare the editions but will give my opinion on the story itself.  Colleen first started this comic when she was a teenager herself and part of its charm comes from that because an accomplished writer would just never put so many different elements together in one book expecting it to work.  But work it does, in a big way!  At first I was a little stunned with everything that was going on; it's so out there!  but then I just got sucked in and kept turning the pages.  There are a lot of characters introduced in this first book which can often be a problem but each one looks different and has such a distinct character that I took them all in very easily and always knew who was who.  This is major space opera, something I haven't read in a very long time, and is definitely a product of its time; however, I found it extremely addictive and the art is stunningly beautiful.  One thing about the art that did jar me though was just how eighties it was; you can't get around the fact you are reading something written/drawn a long time ago.  A lot of men look like they belong in the group Platinum Blonde.  The women are either Madonna clones or preppy with short-short hair cuts.  The Japanese manga art of making the men look like girls is employed on a few of the alien men and especially the main character who jarringly looks like a beautiful woman except when his shirt is undone.  He creeps me out actually.  It's the eighties look that stopped me from enjoying this a full 5 stars; the plot really grabbed me but just not enough to get past its dated look, earth-side.
Labels: 1987 2013 4* graphic novel image comics science fiction space opera