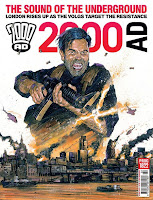 This issue sees the end of two running series and includes:

Judge Dredd: Wolves, Part 3 - The conclusion sees all the sov citizens moved out of Mega-City One but at the last minute Dredd has a better idea than sending them back to Sov City. (3/5)

Ampney Crucis Investigates: The Entropy Tango, Part Eleven - The final episode here explains the backstory of what has been going on but is a bit of a let down as it is a cliffhanger and obviously we have to wait around for the series to come back some day.  This will be really good some day when it's finished and published in a trade though!  (3/5)

The Red Seas: Fire Across the Deep, Part 7 - The two dog heads, who I've always assumed was Cerberus minus a head, ask to be taken back to their body at which point they release "the beast in me".  (4/5)

Future Shocks Intestinauts - The inside story of "medicine" at work in the stomach.  Then we learn the maker of the medication is also the maker of the disease.  I don't usually like these future shocks, but this wasn't bad. (3.5/5)

Savage, Book 8: Rise Like Lions, Part 11 - Neither side can understand why the other continues to hopelessly give up their stand on this bridge.  Then the Volgs find out that the famous Savage is the leader of the other side. (4/5) 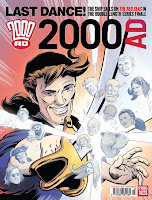 This issue sees the end of two more running series and includes:

Judge Dredd: Black Kisses - A one shot story with a really cool murder case that Dredd and a new recruit are investigating.  (5/5)

Savage, Book 8: Rise Like Lions, Part 11 - The final episode of book 8 shows once more, the futility of war and the misrepresentation of each side by the other.  A sad poignant ending as Savage's team finally gets the sniper and thinks he's a monster when they find a notebook which appears to mark all his kills.  Only thing is, we know they got the wrong guy and what those marks really mean.  (5/5)

Past Imperfect: Rocket De la Revolution - A one shot which imagines an alternate reality where a Cuba is thriving , happily under a Utopian life headed by Castro.  Until one man questions the reality of his life ... (5/5)

The Red Seas: Fire Across the Deep, Part 12 - The final episode is twice as long as normal and has the dog beast, named "Erberus" take control of the fight against the goat man and there is a final rundown of all the escapades they have been involved in.  So now that they've beat the devil, their run isn't over, they are just going to take a break.  Not bad for an ending that isn't a total ending.  (4/5) 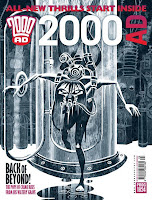 Judge Dredd: Cypher, Part One - This continues the Sov. storyline.  A Sov bigwig and his bodyguard arrive for a secret meeting and an assassination attempt is made on the Sov.  The assassin is caught but escapes.  Dredd and the bodyguard give chase.  Great start (5/5)

Dandridge: The Copper Conspiracy, Part One - An interesting beginning!  We have a man, a doctor actually, who has been given a magic jacket which gives him physical form.  He's a showoff, a playboy, and a troublemaker to start with.  (4/5)

Tharg's 3rillers Presents Survival Geeks, Part One - So a girl goes home and spends the night with a nerd only to find out in the morning one of his roommates (think TBBT here) has moved the house through transdimentional travel throughout the night.  She thinks they are kooks until she opens the door and is taken away by a dragon.  LOL.  Loved it!  (5/5)

Stickleback: Number of the Beast, Part One - Edginton and D'Israeli.  Oh my.  The art is freaky, creepy gorgeous.  And the story is of the steampunk variety as we are introduced to a strange man with spikes sticking out of his spine who has just been reanimated after five years in stasis and the also strange man who revived him a bit early.  An intriguing beginning!  (5/5) 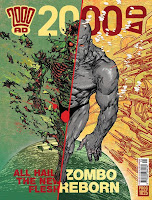 Judge Dredd: Cypher, Part Two - The assassin is caught, the bodyguard figures out that the sov. was not the real target and that's a wrap.  (4/5)

Dandridge: The Copper Conspiracy, Part Two - Some weird men made out of copper are after Dandridge because they think he stole a fairy dagger.  The woman who gave him the suit is some sort of witch and has control over it, thus over Dandridge.  This is proving very interesting!  (5/5)

Tharg's 3rillers Presents Survival Geeks, Part Two - Sam, the girl, ends up at some Dark Lord's place where he wants her to fight for her honour to win him, yeah right? and the geeks come to save her.  This is all tongue in cheek and full of nerdy sci-fi/fantasy references.  It's funny and a great change of pace.  (5/5)

Stickleback: Number of the Beast, Part Two - One eye, that's what I'm calling the other strange guy cause we don't know his name yet, tells stickleback what has happened to the world and why he brought him back.  But before S. will get down to business he has some business of his own to attend to and goes off to visit the White Lotus Empress.  This is the best thing going right now.  (5/5)