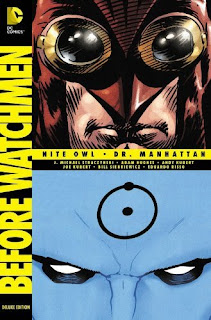 "Writer J. Michael Straczynski is joined by artist Andy Kubert in flight with the gadget-savvy hero known as Nite Owl, as Dan Dreiberg inherits the role from Hollis Mason…but can Dreiberg work with the vigilante called Rorschach?

Then, JMS teams with fan-favorite artist Adam Hughes for a tale of Dr. Manhattan. For Dr. Manhattan, past, present, and future are one and the same. But as he observes the events of his life, do they remain the same?

Received a review copy from DC Comics through Edelweiss.

I like Straczynski, he wrote the Spider-man series I like, so I was particularly looking forward to this volume.  The first half is about the origins of the new Nite Owl who takes over from the previous Nite Owl of the Minutemen.  I really enjoyed this story, not only was it an origin story but it was a full-fledged case as well, which was entirely absorbing.  Even though this is Nite Owl's book, Rorschach is given equal time as the beginning of their partnership is explored.  Rorschach is one of my favourite characters so I enjoyed this aspect.  The Dr. Manhattan story was not quite as good as it was very deep into the ramifications of time and how M. makes a change which signifies the end of the world.  The story got better at this point for me as it became more action oriented as he, with the aid of Ozymandias, set out to fix this huge split on the time line.  The book ends with a short but very intense background on Moloch which continues to also add to the character of Ozymandias.  This was probably my favourite part of the whole book!  I haven't read all of the B4 Watchmen yet but so far this is my favourite and I'm predicting will end up being so, as well.
Labels: 2013 4* DC Comics graphic novel superheroes