222. The Reason for Dragons by Chris Northrop. 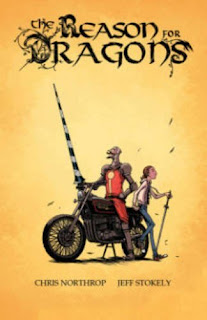 The Reason for Dragons by Chris Northrop. Art by Jeff Stokely. Introduction by Sean Murphy.

"Tells the story of Wendell, a high school outcast who lives a lonely, suburban existence, losing himself in books in order to avoid his distant, motorcycle-riding stepfather, Ted. When the school bullies convince Wendell to venture into the forest around their neighborhood and explore the long-abandoned Renaissance Faire grounds they all believe to be haunted, Wendell is surprised to find a man living in the barn—and even more surprised by the man himself. His new acquaintance seems the definition of crackpot, believing himself to be a medieval knight named Sir Habersham, tasked with the duty of slaying the dragon he insists is wandering the woods. But when Wendell starts hearing rumblings—and listening to Habersham’s stories—he starts to wonder if perhaps it could all be true. In a heartfelt coming-of-age story, Wendell must defy logic in order to follow his heart."

The best thing about this book is the art.  Stokely has done a brilliant job in depicting these characters and bringing to life the mood and atmosphere.  The story itself is mediocre, just barely holding my attention throughout.  What I actually enjoyed the most was the ending which contained several short stories exploring the characters somewhat deeper, especially Ted's background.  The book doesn't quite seem to know its audience.  Recommended on the back cover for ages 12+, I can't agree.  The story itself works for this age group as it takes a point in making sure that it hits you over the head with message, in case you didn't figure it out yourself but there is a section where Wendell is being bullied by fellow sixteen-year-olds and the language is *extremely* vulgar.  I agree it is appropriate in this situation but it makes the book inappropriate for the average 12 year-old.  The short stories about Ted's Vietnam experience are more adult as well.  Finally, the last thing that just bugged me on a personal level:  Wendell is seen several times reading "Moby Dick"; it would have been so much more in tune with the whole book's theme if the book had been "Don Quixote"! Middle of the road book.
Labels: 2013 3* Archaia Entertainment coming of age fantasy graphic novel YA