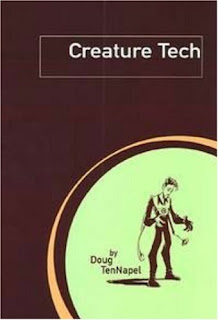 "Good battles evil, and the world hangs in the balance! Resurrected by the Shroud of Turin, the zombified Dr. Jameson intends to finish what he started 150 years ago -- destroying the earth with a giant space eel. Standing in his way is Dr. Ong, a would-be pastor turned scientist who now works in a government research facility infamously known as "Creature Tech." Aided by an unlikely cast of rednecks, symbiotic aliens, and a CIA-trained mantid, Dr. Ong embarks on a journey of faith, love, and self-discovery. All in a day's work at Creature Tech!"


My review is of the out-of-print first edition by Top Shelf, the current publisher is Image Comics with a 2nd edition.  On my journey of reading TenNapel this title keeps coming up and being referred to as one of (if not the) best of this works, so I must admit my expectations were probably pretty high. I'd also heard this one had high Christian content and one of the things I  love about Doug's work is his ability to put his Christianity subtly into his mainstream work.  So I'll just come out and say it; this wasn't what I'd built up for myself, not my favourite of his (I'm thinking Gear & Bad Island so far, for myself, though I still have many to go).  As to the Christianity, the Shroud of Turin is a big plot point so there are many Christian themes (including loss of faith and returning to it) but the story is more about a Christian than about Christianity.  Gear is much better on this level and so much more subtle.  The story itself is major weird and wacky, just as expected from TenNapel.  Truly humorous and laugh out loud funny at times.  With a cast of characters including a giant slug, a symbiotic alien life form, a deformed love interest, demonic hellcats, a giant space eel, just to name a few, believe me when I say there is never a dull moment.  Through all this action Doug never fails to bring his characters to life; there is the lovely Katie, with a deformed hand and eye that Dr. Ong falls in love with, TenNapel's usual father/son relationship is included this time though with Dr. Ong and his aged preacher father, and especially lovable are the redneck "Walmarts": Ed and Al.  There are also several sidekick characters who are much more than that with their poignant storylines. Not my favourite TenNapel as many have claimed it to be, but still a great one, as I'm finding out at this point that Doug TenNapel just doesn't know the meaning of mediocrity.
Labels: 2002 3.5* christian science fiction top shelf YA