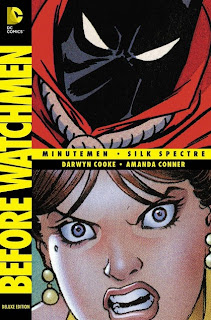 "Darwyn Cooke tells the tragic tale of the Minutemen, assembled to fight against evil in a world spinning out of control. Can these heroes from completely different backgrounds and with completely different attitudes on crime come together? Or will they fall apart before they begin?

Then, Cooke and Amanda Conner take an look at the Silk Spectre’s early years with her overbearing, Super Hero mother, chronicling her journey down the winding path toward becoming her own kind of hero.

Received a review copy from DC Comics through Edelweiss.

I read Watchmen a few years back and really enjoyed it so was looking forward to reading these new additions to the canon. Just so you know where I'm coming from, I'm a fan of the original book, but never did see the movie and am not on the level of a groupie, just a one-time reader.  These Before Watchmen books don't seem to be numbered so I stated with this one because it featured the Minutemen who were the precursors to the Watchmen.  The book contains the two stories.  First I just loved the 80s style art, both by Cooke and Conner.  The Minutemen story was told in a flashback as the group had disbanded and Night Owl had written a tell-all book and was going around seeking approval from the former members, though receiving nothing but protestations to not publish the book.  Through this we flashback to the forties and the whole story of the Minutemen.  I wasn't particularly thrilled with the plot.  I didn't like the book angle, it made Night Owl an unsympathetic character; I had no interest in the gay plots nor the revenge themes.  It was interesting to get a background story on these guys but I certainly wouldn't be interested in any more stories about this team as they are not likable as a group at all.  Silk Spectre is the daughter of one of the original Minutemen members and we get the story of her growing up until eventually she joins the newly formed Watchmen.  I enjoyed this half much better.  It was a much more entertaining story but I found her mother's character, Sally Jupiter, harder to like than in the Minutemen.  Otherwise the angsty story of a teenager rebelling against her mother's training of her to take her place as a masked hero and her eventual realization that she is cut out to be in this line of work n spite of her mother was good and made me more interested in Silk.
Labels: 2013 3.5* anti-heroes DC Comics superheroes