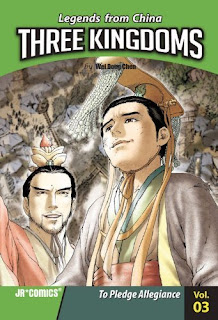 "With Zhuo Dong gone and a weakened Emperor Xian in exile, a power vacuum has opened in the lands ruled by the Han Dynasty. Soon, Cao Cao, Shao Yuan, and Bu Lu are jockeying for position in the race to rule the land. Provinces will change hands, allegiances will shift, and the law of the land will change in ways no one could have imagined."

Continuing on in the same format as the previous volumes, the story in volume three is very political centering  around battles and scheming between the various warlords.  Warlords Bu Lu and Cao Cao are the central figures in a myriad cast of uncountable numbers.  Characters are labeled with their name upon their first appearance and usually more than once before it is assumed you have recognized who they are.  This is *very* helpful when dealing with this number of characters, with non-English names and often similarly written names such as Bu Lu vs Bei Liu.  On the whole I really enjoy this series as I love Chinese history but this volume was pretty heavy going as I'm not a military-minded person.  I prefer the personal stories over the military planning and battle action but it is of course an important part of the story and the main characters' personalities are developing for the worse as power takes a hold of them. This volume has none of the romantic or violent graphic scenes found in the previous two volumes but I'm keeping my age recommendation the same as unless the child has an intense interest in ancient military strategies the reading will be too dense for youngers.  I enjoyed the first two volumes best, but at this point I'm still eager to read on.
Labels: 2013 3* ancient history China graphic novel historical fiction Jr Comics