60. Jerusalem: The Story of a City and a Family by Boaz Yakin 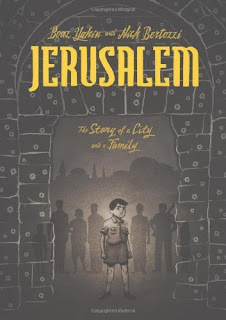 Jerusalem: The Story of a City and a Family by Boaz Yakin. Illustrated by Nick Bertozzi


"Jerusalem is a sweeping, epic work that follows a single family—three generations and fifteen very different people—as they are swept up in chaos, war, and nation-making from 1940-1948. Faith, family, and politics are the heady mix that fuel this ambitious, cinematic graphic novel. With Jerusalem, author-filmmaker Boaz Yakin turns his finely-honed storytelling skills to a topic near to his heart: Yakin's family lived in Palestine during this period and was caught up in the turmoil of war just as his characters are. This is a personal work, but it is not a book with a political ax to grind. Rather, this comic seeks to tell the stories of a huge cast of memorable characters as they wrestle with a time when nothing was clear and no path was smooth."


Absolutely outstanding!  This chunkster of a graphic novel is a gripping read that I could not put down once started.  It is one I already plan to re-read.  Starting off with a map and couple pages of text we are given an historical background of Israel/Palestine up to the starting date of the book post-WWII 1945.  Follows is a one page text background of the fictional family featured in the book up to this date as well.  The reader is then fully immersed into the chaotic, war-torn life of a Jewish family whose members have differing viewpoints on the issues surrounding them.  Very much a family story but heavily grounded in its political background. If, like me, you know of this conflict only from modern times, you will find the historical background of the making of Israel a compelling story.  The author manages to give an even presentation showing no bias to either Jew or Arab, only coming off as being extremely anti-war and biased totally against the former British Commonwealth.  The family story is heart-wrenching; there are moments of levity but mostly it is a dark tale of hatred and love.  The b/w artwork is beautifully realistic though at times the realism of the atrocities of war can be painful to look at.  A stunning book which I wouldn't be surprised to see on a few award lists for 2013.