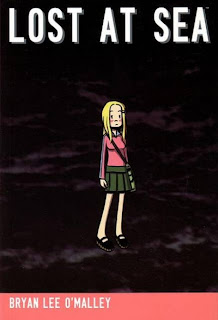 
Having read the Scott Pilgrim series, I saw that O'Malley had written only one other book so I decided to see if it was any different than the Scott books.  It certainly is. This is the story of a girl on a journey, a road trip and her immense angst as she tries to figure out what her life means.  She feels she has no soul and searches for it in a cat.  Very strange with lots of crazy symbolism if you want to take the time to try and analyze it.  But, to me, just random wanderings of an existential nature.  I got bored halfway through, but carried on and did have a laugh at the chasing of cats at night as Raleigh tried to stare into their eyes looking for her soul.  One thing I may not have mentioned before though is that I do enjoy O'Malley's art; it has a manga vibe to it but is definitely Western and the simple facial expressions show a lot of emotion.