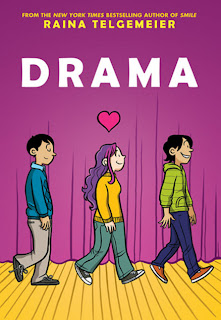 "Callie loves theater. And while she would totally try out for her middle school's production of Moon Over Mississippi, she's a terrible singer. Instead she's the set designer for the stage crew, and this year she's determined to create a set worthy of Broadway on a middle-school budget. But how can she, when she doesn't know much about carpentry, ticket sales are down, and the crew members are having trouble working together? Not to mention the onstage AND offstage drama that comes once the actors are chosen, and when two cute brothers enter the picture, things get even crazier!"

When I was in high school I was on the "House" committee for the drama club: basically we took care of the audience each performance, intermission, etc. and this book brought back some fond and some not-so-fond memories of that time.  It is a really fun quick read but not anywhere near as good as "Smile".  There is too much teen angst and crushes going on for my tastes but I'm sure the intended audience will be just fine with that.  Though I do think the author should have set the book in high school rather than middle school.  She even mentions in her note that school is when she participated in drama club.  The emphasis on crushes, both hetero- and homos*xual, in a frivolous manner makes it hard for me to recommend for the intended audience though.  Nine to twelve year olds have much better things to do with their time and energy, imho, than be encouraged to carry crushes and date.