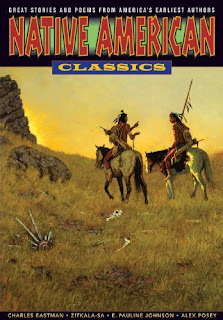 
The latest book in this series is rather unique in that it focuses on Native Literature written mostly in the mid-late 19th century.  The stories have been adapted to the graphic format and from what I can tell most of the writers/artists involved are either Native or of Native descent.  Several poems are also presented; a few one-pages, others more epic in their telling.  The collection of stories throws a blanket of bitterness these "Indians" felt toward the "white man" and make some depressing reading.  In contrast, when reading African-American literature of their impoverished hard times there often seems to be a point of redemption, some qualifier that not all of one race are evil or oppressed, there are exceptions.  However, the first half of this book was "us against them" and bitter reading.  At page 54 the stories started to introduce myth like elements, humour, not so dark tales and the "white man" who wasn't the source of all evil.

My favourites were "How the White Race Came to America", which shows how the Devil can enter one's heart and here even the Devil laments at his great evil.  "Prehistoric Race" is a comical "turtle/hare" type of plot but quite different, great illustration and laugh out loud ending.  Same thing goes for the hysterical "Itsikamahidish and the Wild Potato".  Funny farting myth with hilarious art.  The art throughout the whole book is fantastic, not a single artist I didn't get on with.  My only complaint is that too many of the stories focused on the bitter history of the Native-American.  While certainly necessary and appreciated in the collection, more diversity mixed with the successful man and family today, along with the myth like tales would have made for more diversified reading.