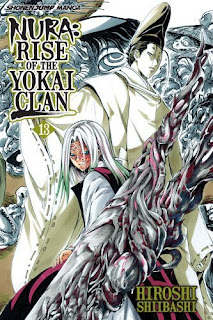 "Rikuo trains for a rematch against the yokai Tsuchigumo, who has his friend Yuki-Onna in his clutches. To get him up to par, Gyuki of the Nura clan has ordered Rikuo to attain a technique worthy of the Lord of a Hundred Demons in just three days. But time is running out and Rikuo hasn’t gained anything but bumps and bruises. Will he be able to save Yuki-Onna?"

At this point, vol. 13, in a series my reviews can't not but contain a spoiler or two.  I always find it a little hard to get going with each volume in this series and I think that is because there is such a huge cast of characters that I'm not exactly remembering them all until they've been around for several volumes.  And sometimes characters don't last that long ...  But, usually, as with this volume, by the end I'm totally engrossed and ready for the next volume!  One of my favourite minor characters hasn't been around for some time but he's back in this volume, Aotabo, and we learn his history.  Rikuo finally learns his Yokai battle power and wow! is it amazing and well worth waiting for.  As I always say battle scenes are not my favourite part of shonen manga but Tsuchigumo is an awesome yokai and opponent; the art of his battle scenes is amazing and great fun.  Lots of talk about Hagoromo-Gitsune but she doesn't show up; looking forward to seeing her next volume as she's a great villain and this volume brings about the death of a minor good guy.  Loving this series!