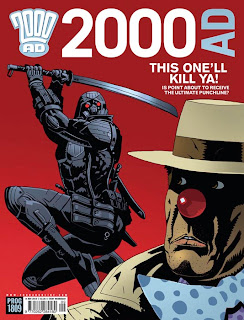 Judge Dredd: The Cold Deck, Part Four - Behind the scenes politics at headquarters as we see who in charge is on the bad side.  A necessary filler piece (3/5)

Low Life: Saudade, Part 5 - A strange flashback to the past then back to now and Frank being tortured to find out what he really knows ... which is nothing. (3/5)

The ABC Warriors: Return to Earth - Very weird episode has Hammersmith in an army surplus store window with another robot for a year. (1/5)

**not enjoying the issue much so far.

Brass Sun: The Wheel of Worlds, Part Ten - Wren and the boy are captured and brought before the head of this land where we learn that many people are no better than slaves or serfs.  This is what Wren and co. are assumed to be.  They play their cards right but end up getting discovered by a house servant.  More intrigue.  (4/5)

The Simping Detective: Jokers to the Right, Part Six - Point continues to play his role at the Church of Simpology and they put him in a strange machine which seems to make him see the logic behind the insanity of it all; as he contemplates this in his room he is attacked by a ninja!  (3/5) Judge Dredd: The Cold Deck, Part Five: We understand why Point was attacked by the ninja and now Dredd and the insider have a major showdown. Action-packed. (4/5)

The ABC Warriors: Return to Earth - Now that war has been outlawed by the UN, the first leader vs leader combat battle is on, Hammerstein is off to be destroyed but is reprieved at the last moment and given a new mission.  This series bugs me.  One issue I haven't a clue what's going on and the next I actually enjoy the story. (3/5)

Low Life: Saudade, Part 6 - Lots of action as Dirty Frank takes down Mr. Overdrive and makes his getaway.  Probably one of the grossest illustrations as Frank spends the entire episode in nothing but his Y-front briefs (ick) - (4/5)

Brass Sun: The Wheel of Worlds, Part Eleven - We find out a bit more about this world and Wren turns things around getting the servant to help them in their quest. (3/5)

The Simping Detective: Jokers to the Right, Part Seven - Totally psycho episode.  Will have to read next installment to make more sense of this! (3/5) 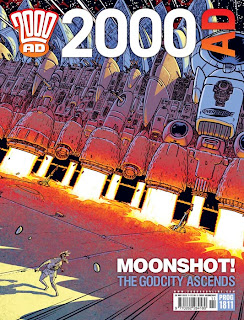 Judge Dredd: The Cold Deck, Part Six - The bad guy, the leader of Godcity, is in full attack mode. Dredd is hurt real bad but he has one trick left and he utters a secret code word.  It ends on a note letting us know the last episode will conclude next issue in a story entitled "Trifecta". (4/5)


Brass Sun: The Wheel of Worlds, Part Twelve - This is the final episode but only the end of Book One so we know the story will return in the future.  Conductor 17 meets a long lost conductor on this world and the Empress of this world is told about the existence of all the other worlds and suggestions of her invasion of them hinted. I've really enjoyed this story but don't like to be left hanging like this for an ending!  (4/5)

The ABC Warriors: Return to Earth - Back to the present on Mars, the other robots thank Hammerstein for the interesting story of his time on Earth and they all gather and set off to ask Tubal Caine to join them.  I don't really get much of what they are talking about here and the series ends with this episode.  Obviously the story will continue again at some point.  I should try reading the trade collections of this as it is really necessary to understand the backstory to enjoy this one properly.  (2.5/5)

Low Life: Saudade, Part 7 - Opens with Dredd sending his code words and flips to Dirty Frank receiving it and finally his memory block has been removed.  A flashback scene of how and why Frank was sent to the moon by Dredd and then a few short pages as Frank tries to get himself out of his current mess.  Again we are told the story will end next issue in a story entitled "Trifecta" (4/5)


The Simping Detective: Jokers to the Right, Part Eight - Point figures out that Godcity's hand has been pushed and the dumbing down of the masses is taking place right now so he puts a cog in the works and plans to split.  We see how Dredd and Frank brought about the "kink" in Godcity's plans.  Once again we are told the story will end with next issue's "Trifecta". (3/5)