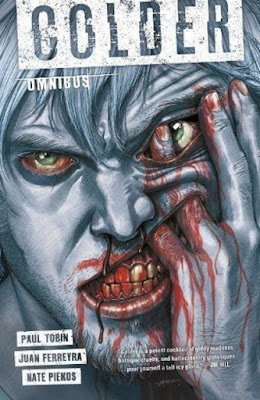 The Complete Colder Omnibus by Paul Tobin
My rating: 5 of 5 stars

Absolutely splendid! The art is amazing and terribly creepy. Just look at that cover! It's a variation on an actual scene from the story. This omnibus contains the complete "Colder" story originally published in three volumes. It's about insanity and as such no simple plot summary can do it justice. However, the main character is Declan, a man in a psychiatric hospital in a coma-like trance who one day "wakes up" and a relationship starts between him and his nurse caretaker. He has powers and the two of them venture from this world to the one the insane inhabit while being chased by real monsters, most notably Nimble Jack. A brilliant story which is fast-paced and a quick read for a book over 400 pages. The book then ends with two prose short stories which take place within the same universe and are both brilliant. This is one of my favourite reads this year.