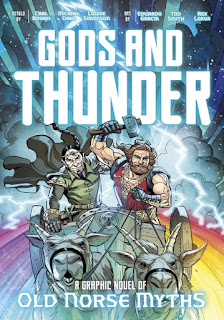 Gods and Thunder: A Graphic Novel of Old Norse Myths by Carl Bowen, et al.
My rating: 3 of 5 stars

A collection of four previously published books which were first issued for the library market. Now bound together in paperback for the general public, this collection of Norse mythology concerns mostly the gods' battles with the giants. Thor stars in each tale and we end with the final battle of Ragnarok. Loki is just as much of a main character as Thor but I wasn't too thrilled with his portrayal. The balance between his tricksterism and evilness wasn't shown very well. These stories are also quite watered down which comes as a surprise to me as Capstone has impressed me in the past with their ability to stay true to original myths while remaining age appropriate. Nevertheless, this is an interesting and action-packed volume which will appeal to kids fond of mythology or the recent movies starring Thor.

Thor and Loki by Carl Bowen - Thor, Loki and a servant are sent to the Land of Giant's where Thor wants to impress upon them how much stronger the gods are than the giants. However, they meet up with Utgarda, the king of giants, who happens to be just as much of a trickster as Loki. Here they try and fail at the giants' challenges. Great art by Marvel's Todd Smith (4/5)

Thor vs the Giants by Carl Bowen - Several short stories in which Loki and Thor go out and battle giants usually in their own land. They are all fun and a couple were new to me. I'm not too keen on how Loki is being portrayed, half good/half bad, as they are missing his true nature. The rest of the illustrations are done by the well known Eduardo Garcia. His style is more realistic and not to my liking as much as Smith's above. (3/5)

The Death of Baldur by Louise Simonson - The tale of Loki's treacherous plan against Baldur and Loki's punishment with the venom dripping onto his head. This also explains the reason for earthquakes. A plethora of characters of Norse mythology show up in this tale, each with a brief cameo. (3/5)

Twilight of the Gods by Michael Dahl- This tells the Battle of Ragnarok, the end of the world. The battle of all battles in which the gods of old are slain. The story is action from start to finish with many characters, each having a brief moment in the sun before they are slain. (3/5)