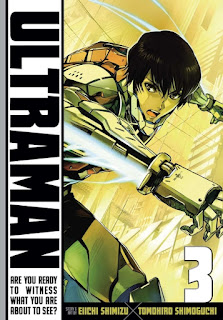 by Eiichi Shimizu
My rating: 4 of 5 stars

This is good, I'm enjoying it but not a lot to say this volume. The plot doesn't move forward too much, rather Shinjiro discusses his feelings about being Ultraman now having killed, with his senior Morobishi, a new human character called Jack living in a hidden alien city and with his father, the former Ultraman. Meanwhile, the serial killer case is being investigated. A good read keeping me interested.