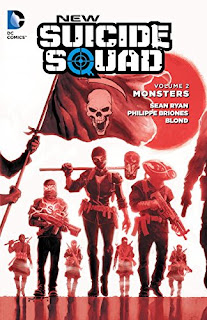 by Sean Ryan; illus by Philippe Briones
My rating: 4 of 5 stars


This is much better than the first volume and has quite a serious story being quite dramatic going into some depth with most of the characters. We have a new team with 6 members (some from last time) divided into two sets of three. Three working inside a cult and three working on extraction. I won't name names but one member gets brainwashed into the cult which upsets the plan from the beginning and a character I never really liked ends up getting a redemptive moment and an actually sad death. Though they are careful to say "lost" so maybe it's not really final, but the book ends letting us know who the replacement team member will be. I liked Harley's insight into herself as well. My favourite new team member is Parasite. Only thing I didn't like is the art for this volume. Harley, my favourite she-villain, is drawn ugly and I couldn't get used to her and Reverse Flash just looked plain weird. No, not a fan of the art. Otherwise, a good volume leaving me looking forward to the next one.