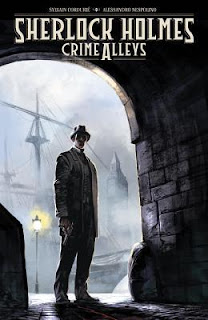 by Sylvain Cordurié; Nespolino Alessandro (Illus)
My rating: 3 of 5 stars

I've read the previous two books by Cordrié which have been translated into English and was excited to read this one. It was surprising then to find "Crime Alleys" doesn't take place in the same paranormal world as the other two. This book features a young Sherlock Holmes, the "budding detective". We find him flatmates with a virtuoso violinist and the two of them are buddies with a Scotland Yard detective named Colin Pike. Notice the disappointing absence of Holmes' famous colleagues. Holmes and Pike get involved in the case when Ron, the violinist, is the next man in a string of elitists who have been kidnapped and declared missing over the last few months. Here Sherlock also meets for the first time the Moriarty family, a young James, but more importantly, the patriarch, his father, Henry. The story isn't paranormal like the first two graphics but it is a little out of this world featuring a mad scientist-type plot with a contraption more science-fiction than realistic and a leader called "Most High Lord" who can't be human with his all over body hair, extraordinary height and claws. A decent enough story, though a little off the grid, and not what I was expecting.