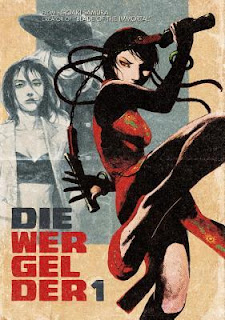 by Hiroaki Samura
My rating: 4 of 5 stars

I was hesitant going into this with the Mature rating but ended up being impressed with the intense, complicated plot. This series is not going to be for everyone; let's get that out of the way first. It is graphic both in physical violence and sexual violence. It's a story of the yakuza to start with though there are many plot threads interwoven. It is a violent world of drugs, sex, and death with the language suited to it.The art is detailed and gorgeous! For me, I found the setting to be unique in a manga, taking place in Germany, China, and Japan. Many of the characters are also German or Chinese. This is a large volume actually combining the original Japanese volumes 1 & 2 so we are getting a lot of plot and as I've categorized them in my mind, there are the three "good" female characters and one "bad" one that have all been introduced. The story involves a lot of men, this is a man's world the yakuza (the Japanese mafia) where the men run things and they use and abuse women. The men are in charge, they are the bosses, they use, torture, rape the women. However, they are weak, unremarkable and forgettable characters. The women carry the story. They are strong, intelligent, some are there of their own accord using the men unbeknownst to them. They have their own agenda. For the women, this is a tale of vengeance. There is a terrible, wicked new product being sold in the underground world. The yakuza has sent three of their top agents into an island of elite prostitution to find out what that product is and how they can get in on it. Meanwhile, two of these women have personal connections to the island and what is being sold, turning undercover rogue. We get some background on each of the women, especially one "Nami", the one-eyed sniper, who has led a terribly brutalized past. An awesome action thriller with intense plotting and characterization, but viciously violent especially in sexual content.