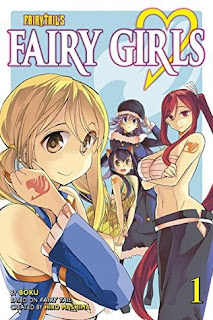 This is good. It starts after vol. 50 of the main series and doesn't intrude upon that series but takes the 4 main female Fairy girls and shows us what adventures they get up to by themselves.I'm not well-versed in Fairy Tail at this point and only know two of the 4 female characters but didn't find it hard to gather what was going on and the plot was easy to figure out even though it got more complicated as it went along. Actually, a good first volume that tries to get a bit of everything in. Assuming we know who the characters are there isn't much development but they do each get a turn at showing off who and what they are, there is a lot of battling, the story is relatively complicated for a first volume and we understand relationships. This could prove to be quite successful as it is an ongoing series still current in Japan. Bad parts are the art is nothing like Hiro Mashima's and is downright not cute nor pretty like his work. Is Boku trying to make up for that with the outrageous amounts of bosoms floating around defying gravity everywhere you look? Perhaps. I'm not offended; I like boobs, but "Boob" really should be in the title to let you know how heavily they represent the main angle of the art. Perhaps "Fairy Girls' Boobs" LOL