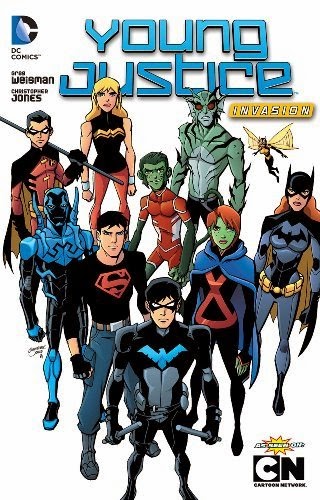 My least favourite of all the Young Justice series. It is good but just didn't live up to the build-up of the first three. This book takes place five years later, though we have infrequent flashbacks to approximately the time period we left off with volume three on what is now Dick Grayson's 14th birthday. This is a major team-up volume and if you like lots of superheroes in one book you are in for a treat! First of all the Young Justice team has now expanded, five years down the road, minus a couple of the old team. Plus the book includes many, many, many appearances by major and mostly minor Justice League members. As for plot, what we basically have here is a re-imagining of the Braniac storyline where he first comes to shrink Metropolis to add to his collection. No one knows who he is and all the superheroes work together to figure out what is going on and stop him. To make matters worse at the same time a new character, (created for this series I think) Kylstar, is also on the scene. He's kidnapped the Justice League's most powerful members and intends to keep them as "weapons". Are the two aliens working together? I loved Kylstar, he's a cool new anti-villain. It was fun having Captain Marvel play such a prominent role. However, Young Justice just wasn't the same; too much was going on to really care about the new members or get to know them so they just weren't the lovable team I'd come to, well ... love. I did however like the background story of Nightwing and Batgirl's blossoming relationship, as I am a big fan of that couple. But what I most of all missed was "What happened in the missing five years?" Somebody has to write a series filling in the missing years!!! It's possible to just read the first three volumes and be sad the series ended when it did as this doesn't give any feeling of satisfaction on that count. This volume could also be read as a standalone.