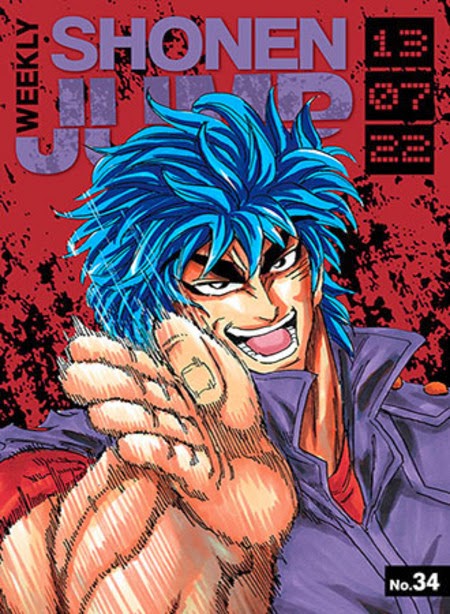 This is a big issue with 277 pgs. It has the month's Yu-gi-Oh episode and the final chapter of Cross Manage. I'm starting to get the idea of what's going on in some of these with this, my 2nd issue. Am enjoying the most the ones I already know like Bleach and Dragonball but of the new-to-me ones I'm starting to like World Trigger and One-Punch Man the most.

1. Toriko: Gourmet 242 - Still have no clue what this is about. The battle continues and a creepy guy comes in with a new knife that fillets everything. The art is pretty awesome here; I just love the monsters and once again the chapter ends mid-battle with a new guy being introduced. I like this, just need some plot to be introduced. (3/5)

2. One Piece Ch. 715: So there are a lot of people fighting for something at this point and the various people are battling. Luffy is the only main character here and he shows up at the end but he is in disguise. (3/5)

3. Jaco, The Galactic Patrolman Ch. 2: Loving this cute new story by Toriyama! The alien wants the old man (Omori) to fix his spaceship, but in the meantime some government people come along and tell Omori he is living illegally on the island and must leave in a week. We learn a bit about each of their backgrounds and the plot starts to shape involving a time machine. (4/5)

At this point my computer crashed and I lost a portion of what I wrote, so briefly for 6 & 7.

7. Nisekoi Ch. 83: slice of life shoujo, romance from boys' point of view, getting to know characters. not my thing (3/5)

8. Bleach #546: Ichigo is not in this issue but he is talked about. He is off training and will get a power which might not let him return to earth ever. Quick switch to Chad and Inoue where they are getting ready for the battle then final switch to the Quincies where we are told there are only 9 days until the end of the world. Intense! Then editor's note tells us Bleach will not return for 7 issues. Wah! (5/5)

9. Cross Manage, Final Chapter: Just a sweetly, sweet ending. Too shoujo for me and I only started last issue so haven't a clue what it was about, besides a lacrosse team. (2/5)

10. Yu-Gi-Oh! Zexal Rank 32: Jumping in here, never having read yugioh in my life. This manga runs only once a month. Not sure who the good and bad guys are yet but this was a battle episode which I'm guessing this manga is going to be all about. I liked how things went and thought the guy with the white spiky hair was pretty cool. (3/5)