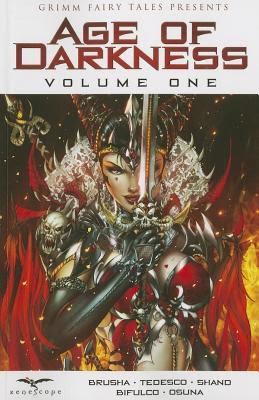 Awesome! This is a major volume in the Grimm Universe with all the realms coming together for an epic battle with the Dark Queen and her Dark Horde. A lot of major characters are in this one with some new ones being introduced as well. Things are getting pretty hairy for Grimm readers, especially like me who can't seem to get a grip on what order everything should be read. But this is definately a set up volume and even though it jumps all over the place it also puts into perspective what is going on with everyone. This volume itself mentions Myst, Wonderland, the New Gods and the Realm Knights. Lots of action and violence as usual but surprisingly tamer than the norm on sex and titillating images. The last issue, written by Pat Shand, one of Zenescope's regulars and a favourite of mine, was very poignant and has a particularly excellent ending. I also think if you've been a dipper into the Grimm Universe so far I think this series is a good place to get reintroduced to the action.