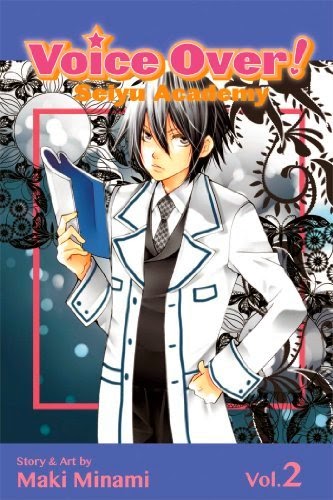 "After their successful first lunchtime broadcast, Hime and the other Stragglers are looking forward to their next chance to wow the school and prove they have what it takes to stay in the program. But the scriptwriter they were counting on to pen their piece has lost her creative spark. Can Senri and Hime work together to jump-start her imagination?"

I'm trying to broaden my horizons and find some shoujo that I like.  The first volume was funny and sweet, with the voice acting theme being quite interesting.  This second volume didn't follow through for me.  I found the Ume's crushes to be silly and just didn't connect with characters, except Takayanagi, the boy who can't talk to girls, who I have to admit is cute all around.  The students worked on dubbing an anime which I found interesting but then the story took a turn and I will not be continuing the series.  One of the female characters is going to start living as a boy and I do not like girls pretending to be boys (or vice verse) plotlines.  I do have the next volume though, so I'll give that a fair read and then move on to something else... 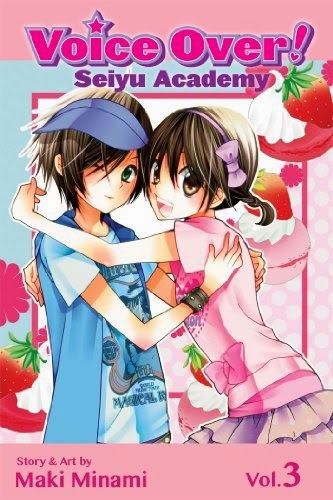 "Hime just got her first big break in voice acting, but it means she has to move out of her house and pretend to be a boy! Her new manager, Yamada, is willing to put in the extra time to train her personally, and Hime’s hope of being a voice actor seems close to being fulfilled. But Yamada insists he’ll only use her for male characters. Will she have to give up on Lovely ♥ Blazers to see her dream come true?"

I didn't think I was going to like this too much what with the girl-pretending-to-be-a-boy theme introduced last volume and the pink cover this time.  BTW, I loooved Vol. 2's cover!  So, I was surprised to find I did enjoy this volume.  I really do like the characters in the spotlight this volume, they are so sweet.  I really like Hime, she's so fresh and naive (but in a refreshing way).  When her gruff voices come out it is so cute.  The end of this book had an interview with some real voice acting students which was very interesting; that theme was what drove me to try this series in the first place.  The plot here concentrates on the only two boys (plus her manager) who know she is pretending to be a boy so I wasn't faced with any of the stuff I didn't like.  The middle section dealt with a lot of romantic feelings between Hime and various boys and off-scene ex-girlfriends as well.  This did get quite confusing for me as I'm just too old to appreciate this sort of highschool heart-throb stuff.  Perhaps if one is a vampire or such, maybe?  LOL.  Anyway, this is a decent series, cute and so far totally clean.  I'd recommend it to the intended audience but it is just not my thing and I will not continue any further, though I did enjoy my peek into the series.
Labels: 2013 2014 3* humour manga romance shoujo T viz media YA