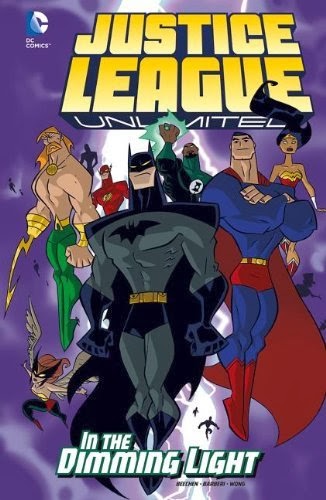 "John Stewart and Green Arrow encounter an old member of the Green Lantern Corps as they fight a trio of alien invaders. Will this elderly Lantern be able to help them defeat their foes, or is he too out of touch with reality?"

Based on the Cartoon Network animated series "Justice League Unlimited".  This is a fun story for fans of Green Lantern as he and Green Arrow take centre stage with Red Tornado and Fire assisting.  The first ever Green Lantern shows up fighting his archenemies The Triptych but Zibar really should be in retirement.  Fun battle; I enjoyed the input of the two lessor known sidekicks in this story and we also get a morality tale of knowing when to give up and not having shame when we've done the best we can. 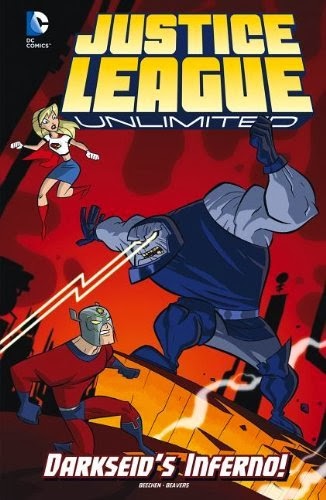 "The Justice League is assembled to help Orion and the New Gods stop Darkseid from unleashing his new weapon: the X-Cannon, which is powerful enough to destroy the Source Wall and give Darkseid access to the one thing he wants above all else: the Anti-Life Equation!"

Based on the Cartoon Network animated series "Justice League Unlimited".  Almost the whole League shows up to fight Darkseid this time.  Whenever all the heroes or bad guys get together it's always going to be an action-packed story and this one is.  Trying to stop Darkseid from breaking the wall that separates us from the ancient beings (thus the source of life) everyone puts there best effort forward.  But Supergirl takes the spotlight as the story opens with her complaining about her adoptive parents (the Kents) and her later learning a life lesson about what it's like for someone to have truly unloving and/or abusive parents.  Good battle, good message.