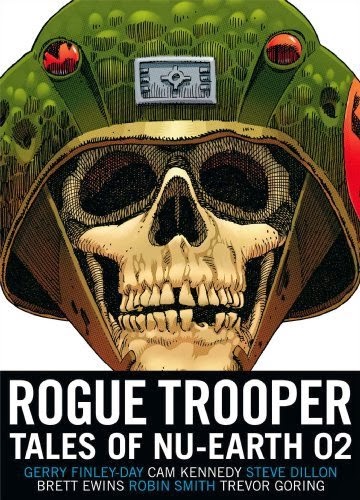 "Book two of Dave Gibbons classic series!
Nu-Earth, a planet ravaged by war, its atmosphere poisoned by chemical weapons. In this battle-scarred landscape, the Norts and the Southers fight where only the Genetic Infantrymen can survive unaided. Rogue is one such soldier and these are his tales...

As the war between the Norts and the Southers continues to rage across Nu-Earth, the lone Genetic Infantryman known as Rogue Trooper wanders through the battle-scarred landscape in search of the Traitor General who betrayed him and his comrades. As their final confrontation approaches only one is sure to survive!"

Brilliant!  One of the finest characters to come from 2000 AD, Rogue Trooper is at his best throughout this volume.  There is a decidedly deeper plotting involved with the stories presented in this collection.  The issues they were originally released in are almost entirely back-to-back, making a fairly continuous storyline.  Rogue and his buddies: Helm, Gunnar & Bagman continue to wander across Nu Earth in search of the Traitor who was responsible for the death of the entire battalion of GI's, leaving Rogue Trooper as the single survivor.  Gone from volume one is the light-hearted one-off episodes.  There is a bit of humour still present but Rogue is much darker now than in earlier stories.  He doesn't stop for the heck of it to help out just because any more; his mission is too vital now.  But there are some two or three episode stories where he does stop, or is stopped, to help for the greater good.  Rogue's character develops, no matter what his buddies' opinion, in the end, Rogue cannot kill for the sake of it and takes innocence into account.  There is a climax and culmination to Rogue's current situation in this volume which is very exciting and satisfying.  This then leads to a new plot, a new quest, and we end the volume with our team headed in a new direction.  A very good, science-fiction, post-apocalypse read.
Labels: 2000AD 2013 5* science fiction war