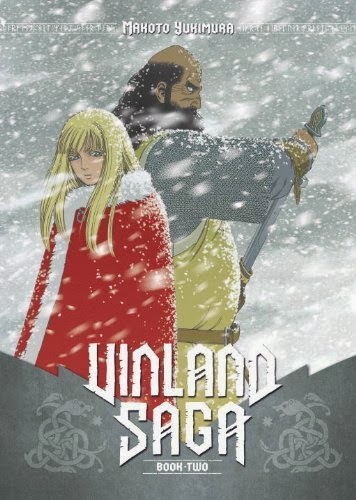 "The foolish King Ethelred has fled, and Askeladd's band is one of hundreds plundering the English countryside. Yet victory brings no peace to the elderly Danish King Sweyn, who worries that his untested, sensitive son Canute will never be ready to take the throne. The king's attempt to force his son to become a man places the young prince within the grasp of the gleeful killer Thorkell! Whoever holds Canute holds the key to the thrones of England and Denmark – and Askeladd has his own reasons for joining the fray!"

Superb!  The first thing that blows me away as I open this book and start reading is the stunning art.  Intricate, detailed, realistic, with a just a few traditional manga catchings; it is honestly the most gorgeous piece of manga of read to date.  This book heavily concentrates on the Danes attack of England; there is much battle and that is the main action throughout as they cross England, Wales and Mercia.  A lot of character development is undergone especially concerning our main character, Thorfinn.  I've become emotionally tied to him but it is impossible to think of him as a hero at this point as his ruthlessness and vengeance are still prime in his mind.  The plot thickens with the character of Askeladd, I looove that name.  Intrigue, plotting, deviousness is coming into play with new characters also introduced including a joyfully killer warrior named Thorkell and the Royal Prince, Prince of Denmark, Canute.  This is an intense historical title and I'm learning a lot about the time period as well as simply enjoying the story.  At some point in my reviews of a manga series I make mention of age suitability and at this time now find I am in complete agreement with the publisher on their OT (16+) rating.  There is extreme violence (this is medieval warfare in all its gory glory), not much language but when it is used it goes right to the most vulgar words, this volume contains a rape-for-fun scene and that is the type of thing that can be expected in future.  So, no, I will not be passing this on to my 13yo.  I myself though cannot wait for the next volume to come out especially now that things have become exciting!
Labels: 2014 5* historical fiction kodansha comics manga OT seinin vikings YA