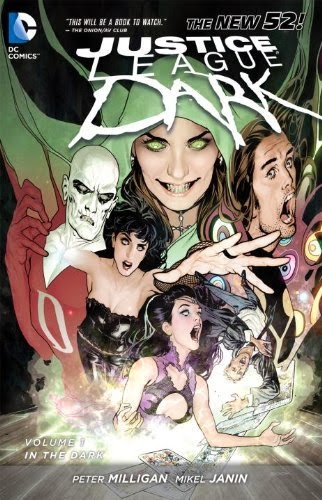 "• The Enchantress has unleashed a wave of chaos across the globe! Shade the Changing Man, Madame Xanadu, Deadman, Zatanna, Mindwarp and John Constantine may be our only hope – but how can we trust beings whose very presence makes most people break out in a cold sweat?

So here I am coming into this one totally blind.  I haven't a clue who any of these (superheroes?) are, nor am I sure I want paranormal superheroes in the first place.  But since I'm reading JL, I figured I'd give it a try at least and OMG! I absolutely loved it!  These guys are fantastic.  Why have I never heard of them?  K, I love Deadman the best, just totally awesome and I couldn't believe when his girlfriend was Dove!  What was she doing here?  I'm not sure about Xanadu; she seems a bit cagey and might not be on the up and up.  John Constantine, wow! and Shade are cool characters.  Zatanna is OK and we didn't really get to know Mindwarp much yet.  Andrew Bennett doesn't show up till the end.  The story was just great, page-turner, freaky, just a little gruesome.  Yeah, I really like these guys.  The art on the other hand didn't wow me, just OK.  Can not wait to read Vol. 2!  Plus I have to figure out if/which of these guys has their own series! 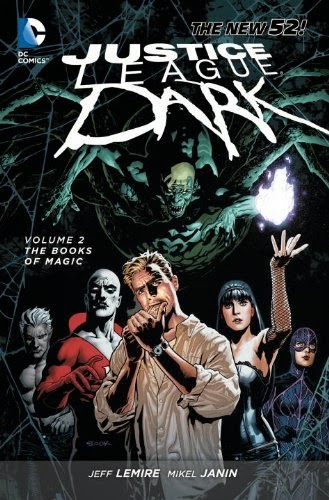 "Collecting issues #0, 7-13 and ANNUAL #1! As vampires across the world attack anything with a pulse, Madame Xanadu mobilizes the team to intervene. But everything they know about how to slay a vampire is useless in this strange new world."

I really enjoyed Vol. 1 and was pretty excited to see the writer change to Canadian Jeff Lemire starting with this volume.  This is a doozy of a story with tons of plot points, character, and a huge cast of characters.  As I said for Vol. 1, all these guys were new to me so I'm just starting to get a feel for them with this book which was a nice long one that involved some serious writing.  I really like this team.  Deadman is by far my favourite and I've ordered DC Presents Vol. 1 which tells his New 52 backstory.  Xanadu doesn't get a lot of page time in this volume but I've figured her out since Vol. 1.  I love Shade, though he disappears half way through.  Mindwarp is not present though mentioned so who knows what's up with him.  Andrew Bennett doesn't get much page time here either but I like him, he's not nice but I'm getting an Angel vibe from him anyway.  The two original members I don't like are Constantine (an obnoxious, arrogant jerk) and Zatanna (how lame is backwards spell magic and it never works!).  New people are introduced in this book and popping out of the woodwork wherever you turn.  My favourite new member is Black Orchid, very cool!  It was even nice for me to see some familiar faces make an appearance: Batgirl, Amethyst, Felix Faust and there are even more.  So if you like books with tons of heroes and villains this is sure to please.  Great story though too.  I won't say much but very intricate as the various people, groups and allegiances search for the books of magic.  Not everyone ends up to be trustworthy and the ending is quite a shocking cliffhanger.  When I first started JLD, I wasn't sure I'd like the superhero/paranormal mix, but this one has me hooked and I like getting to know a whole new-to-me cast without any preconceived notions.  Really looking forward to Vol. 3 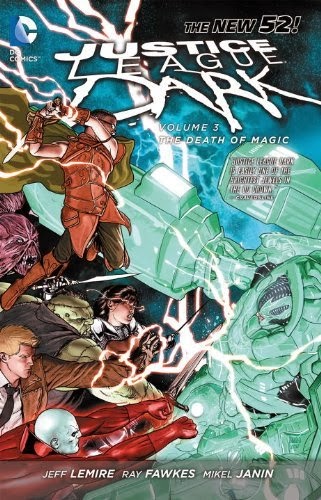 "Transported to another dimension by the Books of Magic, Tim Hunter and Zatanna awake in a world where magic once ruled until mad scientists forced all magical creatures into exile. And while they explore this strange world, the remaining members of JLD follow them and find that the rules of magic here are very different and very deadly. Collecting issues #14-19 of the hit series!"

When I first started out I wasn't even too sure I wanted to read JLD.  Superheroes with magic? I wasn't sure.  But, boy, am I ever glad I got into this because it is one of my favourite series!!! This volume is fantastic.  So much is going on and I'm going to have to give a SPOILER alert just in case I let too much slip from previous volumes or even this issue.  So don't read any if your afraid of learning more than you might want!  OMG!  I love Deadman.  He is my absolute favourite guy on this team, DC, please don't kill him off and if he has been already, don't anybody tell me!  I hate Constantine, he's a conceited jerk but it sure looks good on him when the magic world messes with him and he can no longer lie, that was funny.  Things get really intense in this volume.  The whole Books of Magic story line is wrapped up with some stunning conclusions but we have the introduction of two new heroes from other groups: The Flash & Swamp Thing (I have never read ST in my life).  This series is taking me places I've never been before in the DC Universe.  Flash ends up kind of liking working with JLD, he likes the camaraderie the have here as opposed to his always in-fighting JL.  The stage is set though with the various JLs, there is tension in the air, vying for leadership roles, lots of dissension against Steve Trevor, sorry don't like him can't get past hearing Lyle Waggoner every time he speaks LOL. And just what are the Justice League groups going to look like when this is over.  Can't wait for Trinity War (on pre-order) for March.  Then I'll get up to date with the Trinity of Sin books/Pandora/Phantom Stranger, man, this is wicked stuff.... I'm hooked, I'm a fan!  Call me a Leaguer!
Labels: 2012 2013 2014 4* 5* canadian author DC Comics paranormal superheroes