24. Half Past Danger by Stephen Mooney 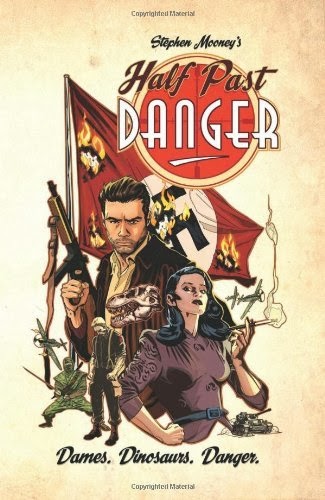 Half Past Danger by Stephen Mooney  (buy)

"Set in 1943, Half Past Danger finds Staff Sgt. Tommy “Irish” Flynn on a remote island in the South Pacific, where he teams with an enigmatic British agent, a U.S. Marine captain and a mysterious Japanese operative in a race against time involving an army of Nazis and, yes, dinosaurs."

A decent world war II historical spy thriller with an unusual element ... dinosaurs!  Yeah, and they are the man-eating kind too so this makes for some fun gobbling scenes.  While totally unrealistic, the spy story and plot was pretty good with a double twist thrown in for added shock value.  I found it pretty easy to figure out what was going on but I read a lot of thrillers.  Mix together Nazi's, spies, and dinosaurs with a team consisting of a  British femme fatale, a Jamesons'; drinking Irishman, a turncoat Japanese operative and a bullet-proof US Marine and you know you're in for a good read.  I found the art a little off though, the background, nature and animals were fine but some of the close-ups and head turns of the human facial features looked rather canine to me.  Not fantastic, but still a fun, entertaining read
Labels: 2014 3* dinosaurs graphic novel historical fiction IDW science fiction spies thriller