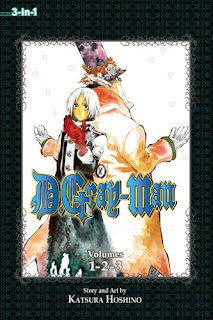 "Allen Walker travels to the headquarters of the Black Order, a group of exorcists out to destroy the Millennium Earl, the creator of the akuma. Allen is already a strong exorcist and wants to join the Black Order, but he might not even survive getting past the guard!"

Vol. 1 - A fantastic volume 1 introduction to this series.  We meet the main character who right away gets involved in his duties of exorcism.  Set in an alternate 19th century with a paranormal universe based on a mix of quasi-Christianity and Japanese mythology.  The background and character building of Allen Walker is more than satisfying, the mythos is compelling and action scenes are aplenty right from the beginning.  Secondary characters are introduced but it is unclear whether they will return in future volumes yet.  The scene has been set, Allan joins the Black Order and I'm all set to dive into volume 2. (4/5)

Vol. 2 - Allen and Kanda are sent on a mission to save the Innocent (soul) taken over by an akuma.  This is their primary function as exorcists.  This story is pretty much self-contained and a great creepy story.  The two boys do not like each other making for some fun bickering.  It appears new characters will be part of each "case" the exorcists work on and I really enjoyed these characters.  While the akuma was freaky, the victims held an emotional story.  I'm hooked on this series already! (5/5)

Vol. 3 - This time Allen is sent off with fellow exorcist Lenalee to a town which is repeating the same day over and over.  No one is aware of this except for one girl whom it is driving crazy and they have come to find the Innocent and the cause of the repeating day.  This volume has a great story, "case", very creepy and the new character introduced, Miranda, promises to be one that will return.  Also, the deeper story of the Black Order, Millennium Earl and a new villain, Road Kamelot are explored and we discover more of what the back plot is all about.  (5/5)

The publisher has rated this series as T+ (for ages 16+) because of "fantasy violence".  At this point, I'm thinking that may be too strict and 13+ should be ok.  There are a few mild swear words (some T-rated have worse) and the violence is creepy but not gory.  I'd say this book is more scary than your run-of the mill T-rated volume and probably classified more as horror than paranormal fantasy but your average 13+ should be fine with it. Mine loves it!