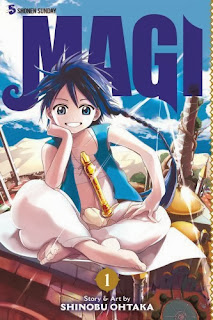 "Together with the djinn Ugo and his friend Alibaba, Aladdin sets out to find his fortune in the depths of the endless dunes..."

Funny, exciting, adventurous novel based on the Aladdin characters but creating its own original story.  So far a team has been put together of Aladdin, who appears to be a young boy, his Djinn, who lives in a flute, and travelling/quest partner Alibaba (who appears to be an older teen).  The Djinn's first appearance was a blast!  Quite shocking and not what I expected at all, he comes into play quite frequently and the monsters they battle are a lot of fun.  The bad guy is established by the end of this volume and it also ends mid-battle scene creating the longing for the next volume.  Publishers have rated this T (13+) for "suggestive themes" which in this volume translates into the male adolescent's fascination with boobies. I thought those scenes were funny while the target audience may find them 'titilating'. Personally I agree with the rating and gave the book to my 13yo but this one may be a bit too risque in some parents' opinion.  I'm really looking forward to more of this series; it promises to be a lot of fun.  At this point Aladdin is reminding me of Dragonball's Son Goku with his cuteness and attitude.
Labels: 2013 5* fantasy manga paranormal T viz media YA