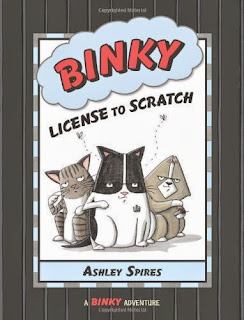 "Binky the space cat and his team of space pets are left at the vet's office while their humans are away. Binky plans an escape, only to stumble on a secret experiment that could give vicious aliens the upper hand! It's up to Binky and his friends to save the humans ... and themselves!

Binky: License to Scratch is the final book in the Binky Adventure series, where dry humour and sci-fi slapstick are mixed with lots of heart."

Received an ecopy from the publisher through Edelweiss.

I'm a big fan of Binky and always look forward to his latest adventure but have to say for the first time I was disappointed.  The story just didn't hold up.  Honestly, it was lame.  The usual familiar pet things that make you go 'aww' or laugh were missing.  The only times I laughed here were from the butt jokes: the thermometre at the vet and the farts.  The title doesn't even make sense.  Oh boy, for the advertised last book in this series what a let down!
Labels: 2.5* 2013 animal fantasy children graphic novel Kids Can Press