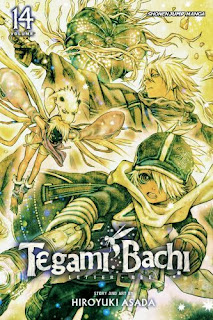 "As Bees and ex-Bees alike gather in Yuusari, the rampage of the unstoppable Gaichuu Cabernet continues—and heart attacks only seem to make it more powerful. As it absorbs the attacks, Cabernet keeps morphing into stranger and more sinister forms. Meanwhile, a tragic accident triggers a different kind of transformation in Niche"…

This is an action-filled volume with lots of battle and several shocking developments.  The volume's title gives away the return of someone who hasn't made an appearance since book one and the other developments are also quite exciting.  Everything is gearing up for finally getting into the secrets of the planet and the man-made sun.  However, this volume mostly concentrates on the recently ongoing battle with Cabernet but also has the return of several other Gaichuu which haven't been around for a while.  It is also cast heavy as almost everyone we know makes an appearance of some sort.  A fast read due to the emphasis on action and the shocks make it a worthwhile development of the plot.  This is still one of my favourite ongoing manga series at the moment.
Labels: 2013 4* manga science fiction viz media YA