Batgirl and the Birds of Prey (Rebirth) Vol. 1: Who is Oracle? by Julie Benson 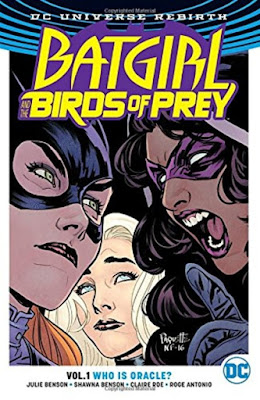 Batgirl and the Birds of Prey (Rebirth) Vol. 1: Who is Oracle? by Julie Benson
My rating: 4 of 5 stars

This new volume 1 works really well as an entry point for both the team and these three main characters: Batgirl, Black Canary and Huntress. Time is taken to give each of the ladies a decent background story leading up to them reforming this team-up. The story was good involving them temporarily joining forces to find out who is using Batgirl's former alias, Oracle. Along the way, they meet up with Huntress and help her with her cause. My favourite character in this was by far Huntress, she's the only one with a real edge and I don't know her too well having read only one book featuring her previously. Batgirl is a bit of a disappointment though as she's immature, a do-gooder and rather dowdy. Her costume is too big for her and looks like a track suit. Black Canary's character fits between the two others with her sometimes agreeing with one then the other. I was surprised her team-up/relationship with Green Arrow wasn't mentioned as I'd just finished that book previously. I like her better in the GA book. Anyway, good story; I'll always read Batgirl no matter what they do to her and I've got a newfound interest in Huntress!